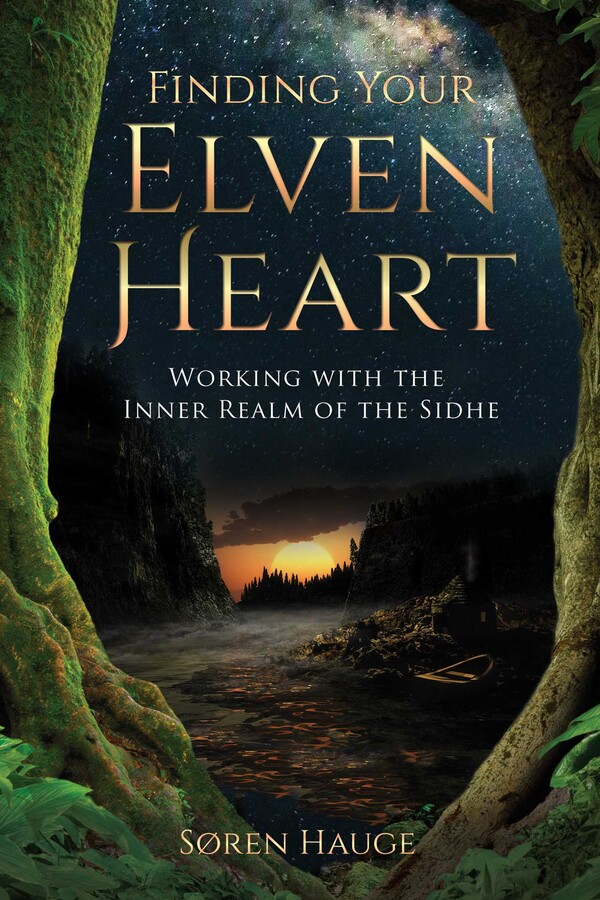 Working with the Inner Realm of the Sidhe

A guide to untaming yourself on a quest to discover your inner Sidhe nature, your ElvenHeart, for wholeness, healing, and awakening

? Explores who the Sidhe are and shares close encounters with them in our modern world

? Offers gifts in the form of simple exercises to bring you into contact with your magical kin and rewild yourself

Awaken to your closest kin, the Sidhe (pronounced “Shee”), and let them inspire you to rediscover your gentle, wild, innermost nature, your ElvenHeart. Also known as the Faery People or the Good Neighbors, the Sidhe are not just figments of human imagination. They are reaching out to us, encouraging a reunion with humanity, and inviting us to partner with them in restoring wholeness to the world. As they reveal, serving Gaia or healing the Earth from the present crisis is not a convenience--it is a necessity.

Offering an experiential guide to reconnecting with the Sidhe and our inner ElvenHeart, S?ren Hauge explores who the Sidhe are, how both humanity and the Sidhe emerged from a common ancestor, and how their untamed nature and deep wisdom bears significance for an aspect of our inner being that has gone to sleep. While the Sidhe did not enter the physical dimension as deeply as we did, they are real beings, very close to us, and different from angels, devas, and nature spirits. S?ren introduces his own Sidhe contact, Fjeldur, and shares close encounters others have had with these beings in our modern world. He also takes you on a journey of rewilding through four portals--the StoneAnchor, the FlowDancer, the FireDreamer, and the WindSinger--to discover the treasure of your ElvenHeart at the core of your being. In the course of this, S?ren offers gifts in the form of simple exercises that help bring you into contact with your magical kin and your inner Sidhe nature.

Through this wild quest, the journey of untaming yourself, you will connect with your Sidhe partners, unfold their inner gifts in your own being, and rediscover the forgotten land of innocent wildness and gentle power within you.

From Chapter 1: The Hidden People
A Conversation between Two Sidhe

Two Sidhe sit together in their world, having a conversation about the wonders of life. Their speech is more like a song than speech. One of the Sidhe is a tall, slender, and graceful male with pointed ears and wild hair, almost like a fan around his head. He is very young and eager, and he is disturbed by the fact that lately his world has been shaken. The other Sidhe belongs to the Elders amongst them. He has lived for a long time and experienced earlier times and many places full of wonder. Now they sit together at a flowing river, surrounded by rainbow-colored birds dancing in the light from the bright green fields of grass.

“Do you believe in humans?” the young Sidhe asks with a slightly strained look. He is worried about that which has interrupted his world and the question is very much on his mind.

The old Sidhe looks at the young with a scrutinizing glance engaged in the past, the present, and the future at the same time. With a deep, peaceful voice his singing returns to the young Sidhe: “We are dancers in the gentle, wild wind, and it is our nature not to become too fixed and rigorous. Therefore, be open my young friend of the wind. Yes, humans do exist. You often sense them as dark shadows passing by or as dense, rigid spheres. They are somewhat at our size, but they do look very heavy and dense.”

The young Sidhe looks with disbelief at the Elder: “You can’t be serious? The gloomy shadows you describe are lifeless echoes from something long gone. What should our business be with them?” The old Sidhe smiles whimsically: “You have kept these dark orbs too much at a distance - and you know it is not our nature to distance anything. Try to take a look with me right now. There is a group of them right there.” The young Sidhe stares slightly scared and with some disgust at the solid lumps that move along at the edge of the Sidhe realm like some kind of zombies or spooky echoes. Nevertheless, he continues observing them, unlike what he normally does. Time goes and he doesn’t think anything happens. His expression shifts between determination, slight discomfort, and a flickering change as he attempts to overcome his tendency to resist. “They seem almost lifeless and they emanate a rather monotone noise.” “Yes”, the old Sidhe answers, “but look deeper, connect with the presence behind the shell, almost as if you look into a dense thicket.”

The young Sidhe continue to stare, almost as if it is a riddle he has to solve, or a trick needing to be revealed. His eyes quiver and he remains perplexed as he senses the loud noise surrounding the tedious, disturbing noise. He is on the brink of giving up when he suddenly detects that inside the heavy, messy wilderness there is something. First, he senses it as a weak clearing that comes and goes, but finally he gets a glimpse of a flickering light far, far inside the murky thicket. He is struck by surprise and his eyes light up in confusion and disbelief. “You are right. There is something in there! What on Earth is it?!”

The old Sidhe breaks out in a big, warm smile: “It is the flame of hope and it is very special as it grows when you stay with it. The flame is a light from the forgotten human heart, and NOW you know why we are a bunch amongst us who have initiated a completely new journey into unknown territory. We simply KNOW that here something is hiding and waiting to be met. Humans do exist and they are our ancient relatives. You probably know the ancient legends about our forgotten Hallows and the magic that disappeared from the world above us. Humans are NOT just myth and humbug. They exist and they live - but their light is imprisoned in the thicket of cynicism and the darkness of isolation.”

The young Sidhe looks with big eyes of disbelief at the old one: “So what then? Are WE really going to save them? Are you serious? Would it not be better to leave them on their own so they can find their way and wake up? I mean, they can’t handle us!” The old one waits for a while and when silence has become penetrating, he continues in a quiet tone: “Some of the wise amongst us who have been here for a long time, have discovered that we actually need something from our human relatives, just like they can benefit from contact with us. We originate from the same root and the myths about our separation are not just fiction. It is a great and wondrous journey towards a new future where we can find each other again in some way or another. My dear young friend, the thing is that many like you doubt that the humans exist. So, why should any good things come out of a journey towards an unknown place? They believe that such a thing would be futile. You have just discovered the flame of hope in the seemingly lifeless humans, and you can actually embark on this journey if you want. We need young blood. We call the adventure towards the new future ‘The Journey to The Forgotten Land.’ Think about it and if you want to participate, let me know. You are welcome. I mean, come with us, if you cannot resist it. The traveling company towards The Forgotten Land bids you welcome if you are ready for the adventure. Humans are real - they live - and we have very valuable things to discover and to share with each other. The future has a new possible course and it seems the timing is now more than ever before
S?ren Hauge

Søren Hauge is a spiritual teacher, coach, and author who has written 17 books in Danish and several in English. He has a master’s degree in the history of ideas and philosophy and an extensive background, with decades of work, in theosophy, holistic psychology, and interreligious work. He is the co-creator of Energy Psychology (the Seven Types) and the SoulFlow Method. Since 2012 he has worked with dedication to unite humanity and the Sidhe. Søren lives in Lejre, Denmark.

“As our world struggles to recognize and respect the many cultural colors that make up the rainbow family of humanity, distant relatives living beyond the veil await our acceptance and embrace. The ethereal reality and ancient lore of the Sidhe community is magically brought alive in this compelling book by S?ren Hauge. Through firsthand intimate experiences, he invites us to open our hearts and honor this hitherto hidden and subtle realm as part of the wholeness we call Gaia. S?ren’s profoundly moving book is an interdimensional portal that cultivates a greater appreciation of the One Life, celebrates the richness of our Human-Elven heritage and shared destiny, and sounds a wild call for communion and cooperation--leaving a warm glow of joyful expectancy in the reader’s heart.”

– Michael Lindfield, president of Meditation Mount in Ojai, California, and international consultant a

“S?ren Hauge teaches us to connect to our inner and outer wild in a way that is immensely life-affirming and joyous. Finding Your ElvenHeart is a practical, deep dive into working with the Sidhe. It is also a wonderful resource for anyone who is seeking to deepen their connection to themselves, to divine flow, and to the natural world.”

– Mary Mueller Shutan, author of The Spiritual Awakening Guide and Working with Kundalini

“You can only write a book like this if you have done a lot of soulful living. That means turning over a lot of stones, having some of them fall on your head--or your heart--and along the way finding some that are pure gold. As an author, S?ren shares all that and more on his journey deep into the mysteries of the ElvenHeart. You’ll know if you are called. We are in the midst of a renaissance, a returning to an awareness of ancient earthly wisdom, and S?ren is on the forefront of this urgent remembering. As a courageous guide he is making a path we all can learn from. This book is both inspiring and practical--I was deeply moved.”

“Finding Your ElvenHeart is truly visionary. It invites readers to connect not just with the Sidhe but with a future of true wholeness--both individual and collective. In the course of the book, S?ren makes clear that the separation between humans and the Sidhe reflects a deeper separation from our own capacity for joy, for aliveness, and ultimately from aspects of our true selves. But the joy and wonder of this book is that working with the Sidhe becomes a path to the greater aliveness that we forgot.”

Working with the Inner Realm of the Sidhe